It is difficult to talk without fervor about such an enormous event as the 12th All-Diaspora Russian Orthodox Youth Conference, which was held from July 1-7, 2011, in Paris, one of the most beautiful European capitals. It would take several pages to simply list the number of participating countries, titles of the five participating hierarchs, the divine services, lecture topics, pilgrimages and excursions. And all of that is important.

But so much more important, I think, are the emotions, the shades of feeling, the stolen glances, the phrases and the prayers lifted to the Lord during those days on the part of the Orthodox youth from all over the world, from Europe to America to Australia.

I will try to formulate all of this in a few notes under the general theme “What I miss at home after a week spent in Paris.”

During the conference, we all became familiar with the Kursk-Root Icon of the Mother of God, under the aegis of which the event was held. Every morning the program began with prayers to the Mother of God before this miracle-working icon for assistance and intercession. The icon accompanied us during meals, divine services and pilgrimages: to St Alexander Nevsky Cathedral, the Russian cemetery near Paris, Amiens, where the Righteous Head of St John the Baptist is kept in a Catholic cathedral.

During the week, each of us had the opportunity at almost any time to pray before this icon of the Theotokos. Honestly, I didn’t even want to leave its side. A small image of this icon now occupies an important place in our family’s iconostasis.

They held choir rehearsals for the youth in the evenings under the direction of Nikolai Kotar of the USA, in which some half of the conferees participated. Even the prayers before meals, which I am accustomed to reading, were sung instead, infectively and touchingly.

In addition to divine services, the choir performed other compositions during the reception at the Russian Embassy in France as part of a sort of shortened Christmas pageant.

My roommate at the hotel was an American girl who almost spoke no Russian. In addition to practicing my American English, this gave me a chance to think about how much language is a matter of principle in the area of religion. Though most participants had Russian roots, there were Orthodox Christians of other nationalities whose ancestors had nothing to do with Orthodoxy.

All of those whom I spent time with were of one spirit in their opinion of the most influential lecture. This was the speech-sermon given by Hieromonk Irenei (Steenberg) of the US, an American by descent, who lived and worked in Oxford for a long time. I never heard a sermon in English, and was just certain that something spoken in Russian that touches the heart could not possibly be uttered in the English language.

Now I see that I was wrong. I understand, having heard the remarkable mix of humor, seriousness, earnestness in all the Christ-centered beauty of Fr Irenei’s monolog.

Three of the eleven youth missionary projects turned out to be a missionary cafe—a place where Orthodox and non-Orthodox can meet, Russians and otherwise, with discussion clubs, videos, chat rooms, established on the basis of classical and spiritual literature.

Judging from the matters put forth upon in these plans, one of the most serious questions is what to do if you are abroad and all alone. Surprisingly, even many young people are faced with this difficulty, and each of them has something consoling to say to others in this situation.

On the Nativity of John the Baptist, we celebrated Divine Liturgy before his honorable head.

We left early, still sleepy. Vladyka Theodosius, leading the way, read the history of the head of John the Forerunner in the bus for those who had not fallen asleep during the reading of the morning prayers and the rule before Communion. The quiet words of this brief sermon was one of the most memorable of the conference. And a rainbow appeared in the sky.

On Friday, the participants of the conference, including the clergymen, began to depart from early morning. And right away I had a strange, sad feeling that this is the first day after the conference that we began without the blessing of a bishop.

And returning to my parish, after the prayer before trapeza, I had the urge to fervently sing “Eis polla eti despota!” 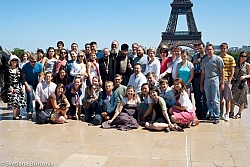 view slideshow >
Connect with the Fund for Assistance to ROCOR
Share This: